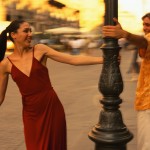 “Well Inspector, it was quite late when I went to bed – about one o’clock. Leaning on the lamp post at the corner of my street, I saw a young man smoking a cigarette. I didn’t take much notice of him at the time, but when he was still there ten minutes later, I gave him a closer look, wondering why he was still there. He was very good looking, with dark brown hair, and heavy dark eyebrows, a little too close together for my liking. However, I did notice that he had a large, jagged scar across his right cheek. I remember thinking what a pity it was – it spoiled his looks. Just then a young girl came along, and they obviously knew each other well, and started larking around.

“I went back to bed and must have drifted off for a while, but I was awoken sharply by shouting and screaming outside. We get a lot of that around here, on a Saturday night. I looked at my clock. It was two fifteen. I just thought it was probably drunken teenagers on their way home from the night club down the road. I buried my head under the duvet and tried to get back to sleep. The racket didn’t last long.

“The next time I needed the bathroom it was light, about five o’clock. I glanced out of my bedroom window as usual as I passed, only to see that poor girl sitting flopped against the lamp post, her legs sprawled inelegantly apart. Her head was lolling down on her chest, eyes closed. ‘Drunken idiot! She’ll have a headache when she wakes up,’ I thought to myself as I went to the bathroom.

“On my way back, I glanced out again, but there was something about the way that she was sitting that worried me. I dressed quickly and went out to see if she was okay. I nudged her with my foot first, so as not to frighten her, but she didn’t move, so I shook her shoulder.

“It was then I realised she was dead! Then I dialed 999. Do you suppose that man I saw her with murdered her?”