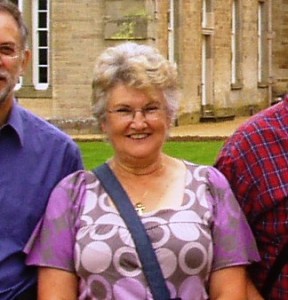 We’ve had lots of laughs over the years,
we’ve shared our secrets and our fears.
At social clubs we’ve danced together,
we’ve been out walking in all sorts of weather.

We’ve worn funny hats, and posh ones too,
we’ve had garden parties with a barbecue,
we’ve had Christmas parties, even in August
and celebrated seeing January the first.

We’ve stayed in funny hotels, but most were heaven
we’ve holidayed in Norfolk, Cornwall, and Devon
Scotland, Wales and the Isle of Wight.
We’ve shared rooms and talked long into the night.

We’ve eaten fish and chips and Cornish pasties,
and had lots and lots of clotted cream teas.
We’ve been to many, many Sunday lunches
and shared several holiday morning brunches.

We’ve both put loads of weight upon our hips.
We’ve been on cruises, canals and train trips,
we’ve often been the talk of the dining hall,
but who cares? All in all, we’ve had a ball.

We’ve been to theatres, concerts, shows,
we’ve shared the same varnish on our toes,
we’ve bought the same tops from Next and Dash,
we’ve swum in the same pool and had a splash.

You were very kind to me and let me share
Christmas Day with your family to show you care.
You supported me well over the years
when I was Nexus link. You’ve mopped up my tears.

Now that your life has come to an end
I wanted to say that you’ve been a good friend.
I know you don’t believe the same as I do
but in the next life, I hope I’ll meet you.

I’ll miss you so much.

We had several. At least three at the Perranporth Hotel and one self-catering in a big house in Mevagissey.

On the first holiday in Perranporth Hotel were Barbara, Tammy, Elizabeth, Eileen, Chris Eggleton, Rose, Kathleen, Linda, Don and Mischka stayed in a flat in Perranporth and joined us for days out. We went there initially to visit the Eden Project and Heligan Gardens. Peter joined us later for a couple of days.

On the self catering holiday in Mevagissey were Barbara, Tammy, Elizabeth, Bernard, Joy & Robin, Kety , Pete & Leo, Linda, Don & Mischka, Clive & Rosemary, Chris & Gordon, Maggie and her mate. I don’t seem to have taken any photos though.

Eight of us shared two self catering chalets on the cliffs in Mundesley. Reg & Hetty came down and stayed in a nearby hotel for a few days and the Norfolk link Julia joined us one day. Peter and Valerie came to see us on another day.

Babbacombe was a Nexus National annual event for a weekend of walking and fun, including a trip to Babbacombe Model Village and a fancy dress party on the last evening. In our party were Barbara, Eileen and Wendy sharing a room, Rose and Tammy sharing a room and Reg and Hetty.

The Cygnet Hotel in Sandown IOW was like Faulty Towers but the food was okay. We went there to celebrate New Year, but the entertainment was awful. Our party were Barbara, Tammy, Eileen, Peter and Valerie, Rosemary and Clive, Chris and Gordon.

Much better was our New Year trip to Scarborough, but I took no photos of any people. Our party there were Barbara, Marie, Tammy, Eileen, Linda and Don, Chris and Gordon.

Barbara, Tammy, Rosemary and Joy went on a five day Lochs and Glens break to Scotland. It was fabulous. I took loads of photos, but only two with people in.

Our Awesome Holiday on Loch Awe

By far and away, our very best holiday together was at Portsonachan, on the very tranquil Loch Awe, Argill, where we had six newly furbished chalets between eleven of us. In  the chalets were Linda, Don and Mischka, Tammy, Barbara and Wendy, Eileen and Rosemary, John and Ann, Peter and Valerie. Jeremy stayed in the adjoining hotel and bagged another Monroe. We were told that the week we were there was the best the locals had ever seen, weatherwise. I took loads of photos, but not many including people.

Our Haunting Holiday in Stonegarthside Hall

Thirteen of us spent a haunting self catering holiday Stonegarthside Hall in Cumbria. I will tell you the haunting stories later. On the holiday were Barbara and Tammy, Elizabeth and Marie on the top floor (the one with the ghost). On the second floor were Linda, Don & Myschka, Joy & Robin, Clive & Rosemary and little Wendy. On the first floor were Eileen and Wendy (Mrs Bridges).