Well, I have done the deed on Halloween and now I risk the haunting!

Many years ago my mother bought several items from a house contents sale at a medieval manor house in Ickenham. I was about eleven or twelve at the time, so it was in the late ‘fifties. Among the items my mother bought was the carved oak bureau, where I used to do my homework, and which got unceremoniously chopped up during our clearance of my garage. That had seen better days and was unsaleable. It had fallen apart being transported from my mother’s house to mine and was subsequently gnawed by my two young dogs. However, it housed a lot of my mother’s memorabilia, so it was useful in my garage.

Amongst other things, including a Jacobean dining chair that needed restoring, another item my mother bought, far more precious to her, was The Baronial Chair. This used to stand in pride of place in the corner of our hallway, giving said hallway an air of grandeur.

It was a beautifully carved Jacobean style chair with arms. I am no expert on antique furniture, but to my mind it belonged in a more fitting place than a modern family home. It should be in a stately home, like the one from whence it came. However, my mother loved it and it travelled with her to her next home where it stood looking very out of place in the corner of her lounge.

A few years before she died my mother moved again, taking The Baronial Chair with her. Again it sat in the corner of her lounge looking out of place, even though she had Jacobean style oak dining furniture which had been specially made for her by Stanley Wood.

The Baronial Chair just didn’t fit with her contemporary, albeit old fashioned style furniture. I used to sit in it because it was furthest away from her roaring fire when I got too hot, but apart from that it made a handy place to put a pile of unread magazines.

The incongruous object was obviously programmed to haunt me anyway. It had a funny smell to it. Funnily I had never noticed any smell when it was in my dining room. No matter how much lavender polish I plastered it with, the smell would not go away. It smelled of old things, very old things. Was this a baronial chair from a past age? Had it belonged to the lord of the manor? Was his ghost still sitting in it?

Not many weeks after I had put The Baronial Chair in my bedroom I just had to take it away again. I couldn’t stand the smell any more. The rest of my house was full up and there was no way I was going to put it in my dining room again, so I called an antique dealer to give me an idea of how much he would sell it for. His valuation was peanuts. My mother would have had a fit if I had sold it to him for the pittance he offered, and I had seen a sort of similar chair for sale years before for ten times the amount he offered. There was nothing for it but to put it in the garage under covers until such times as my children cleared out my effects and got the benefit of any revenue from The Baronial Chair.

Having consulted my children, we came to the conclusion that The Baronial Chair would be better being enjoyed by someone who loved it, rather than being stuck in a garage out of sight. I offered it to my friend. She took a photo of it and sent it to her husband who was on the golf course at the time. He agreed with her that it would look good in their house, and if not it could go into his antique centre and we would benefit from any commission earned from its sale.

My friend was happy. I was happy. The Baronial Chair was happy. Is my mother happy? Well that remains to be seen. My mother has been haunting me anyway ever since her death. She is with me all the time, just standing behind me either egging me on if she approves or registering her disapproval in some way if she doesn’t. So her threat to haunt me if I got rid of The Baronial Chair should make no difference.

I have done the deed on Halloween and now I risk the haunting!

Now the chair sits in much more fitting surrounds in my friend’s home. Her husband will restore it to its former glory and it will be loved again. 🙂 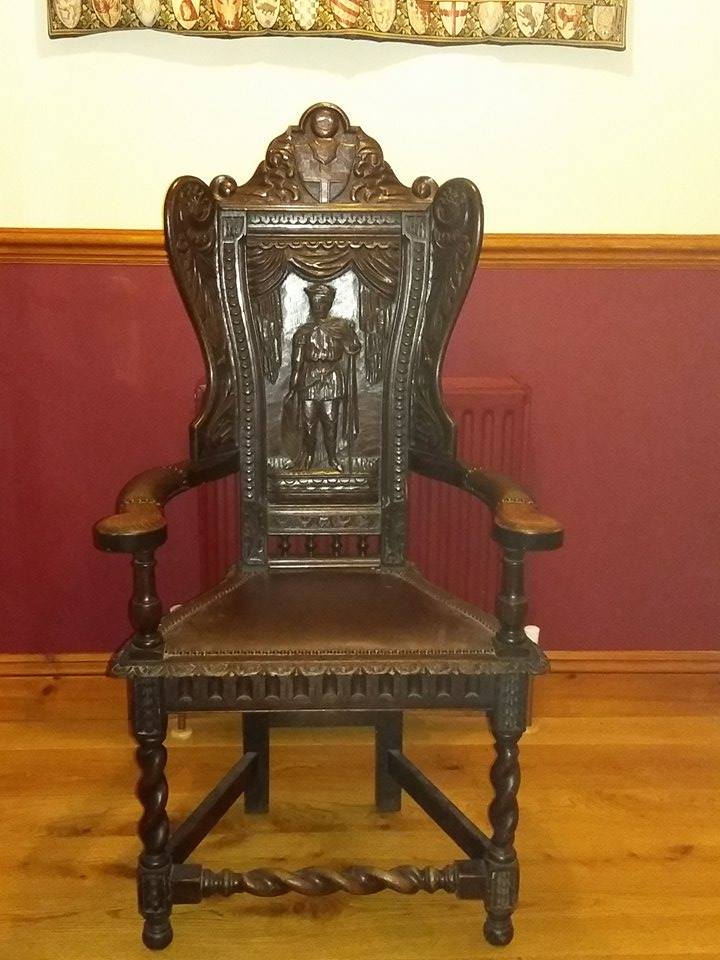