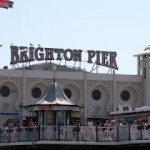 This was her fourth ice cream sandwich in a row. She was out of control. It was probably because she had deprived herself of so much during Lent, but that was no excuse for pigging out on Easter Monday. Brighton seemed to have that effect on her. First go to Harry Ramsden’s for fish and chips – there could be none better in the world. Then saunter down the pier watching the kids pumping their money into slot machines in the amusement arcades, just like she used to do before she became ‘sensible’. Then wander along the front looking to see how many youngsters were brave enough to take a dip at that time of year, as she had done as a teenager, while her parents were sitting wrapped up in thick overcoats on their picnic blanket spread over the shingle. Oh the memories that came flooding back!

Of course, you can’t go to the seaside without having an ice cream, can you? She hadn’t eaten ice cream in years, and there was a cart just nearby, so she bought what was recommended by Mario, the ice cream man. He was such a charmer! He made her feel young again, and the ice cream sandwich was, as he had said, to die for. It wouldn’t harm her if she had another. So she did. 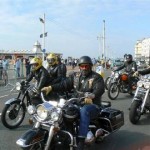 She continued her stroll. There was a lot going on. Motorbikes were streaming in and parking up along the front, sometimes three bikes deep. As far as the eye could see there were bikes, of all shapes and sizes. Harley Davidsons – hundreds of them. She had never seen so many in one place. It must have been a Harley convention or something. That took her back a bit. Years ago she’d been a ‘rocker’, and the usual weekend ride was down to Brighton, fish ‘n chips on the pier, ice cream from a stall, a quick paddle in the sea then back home on the bikes. Oh to be young again!

She reached the end of the front, the end of the parked bikes, and turned back admiring each bike as she passed. Funny how the sight of them still made her tingle. As she reached Mario’s ice cart, she saw a really fantastic bike – custom painted with some scene from ‘Lord of the Rings’. It wouldn’t hurt to have yet another ice cream while she admired the bike. She sat on the nearby bench.

Just then, a group of leather-clad bikers came to Mario’s stall. They obviously had the same recommendation from him and were standing around eating similar ice cream sandwiches as hers. She studied the group. Six of them – none under sixty. She wondered where they had come from.

“Hey,” said one of them. “Mind if I sit next to you? The old legs ain’t so good these days. I need a sit down.” They got chatting; she told him she was an ex-biker. He was easy to talk with. They found they had so much in common, sharing so many memories. His name was Barry. He finished his ice cream and said, “Hey man! That was good. I want another. Can I buy you one?”

Now how could she refuse an offer like that? 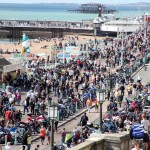 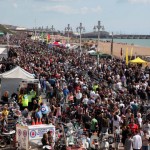 Inspired by the January 2012 1st line prompt from wakeupyourmuse.com