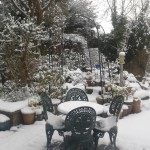 I love my garden after a night of snow, with a blanket of white covering everything. My first sight as I undraw my curtains always makes me gasp with wonder. My circular green wrought iron patio table looks like some sort of intricately iced wedding cake, with the white-tipped green metal gazebo standing tall behind it echoing it’s shape. Nothing stirs.

Earlier on, my dogs had a scout around in their run, partially covered by a huge snow and clematis-clad pergola. As I opened the back door, snow had showered down on them unexpectedly and, looking surprised, they shook themselves free of it. Their usual early morning barked greeting at the world, muffled by the thick blanket of snow above, made everything feel eerie.

The chilled leaves on the buddhleia and on the rhododendron droop inwards, trying to protect themselves against the cold, but balls of snow still manage to cling to the top of their branches. Over to the right, the bright red upright stems of the dogwood stand stark against their surrounding whiteness, as does the icing-tipped dark green ornamental conifer in the middle of the garden. The bird bath nearby looks like a giant Christmas cake on a stand, with an icicle fringe hanging daintily around it.  My three concrete gnomes, Terry, David and Reg, now wear white bobble hats, scarves and gloves.

Something has walked down my pathway, probably next door’s cat, leaving a trail of indented footprints in the otherwise virgin snow. The hungry birds have just started to arrive. Flurries of snow scatter from the branches of my trees as they alight. Their feeders have a build up of snow around the perches, but the birds seek the familiar holes in the feeders and bravely push off the offending loose pile of snow on the perch as they land.

The sun tries to break through and things start to glisten. A slight breeze blows little snowflakes from next door’s cedar tree across into my garden, then a bigger gust starts a mini-snowstorm as all my trees join in shaking off their icing sugar coating. Drips start to fall from the icicles around the birdbath, and from the top of the gazebo, making little patterns in the white blanket below.

More birds join the brave resident robin and wren. A small group of blue tits arrive first, closely followed by the great tits. A couple of noisy blackbirds make an appearance, and the dunnocks come to the feeders, leaving their cosy nests in my snowed over clematis on the pergola. They usually peck around under the shrubbery, now buried under a thick coating of snow. Now come the greenfinches, chattering away to each other. My two resident collared doves land clumsily on the snow laden ash trees down the end, causing an avalanche of snow to fall down on the feeding birds below. They all fly off to try next door’s feeders instead.

I turn down the heating slightly as the sunshine bursts through into my dining room. As I sit reading my emails, still enjoying the magical winter view, the snow starts to clear a little, as the drips from the patio set fall onto the flagstones below, and the snowy covering on my patio gradually recedes away from my house. I sigh, and tear myself away from my mesmerising view and get on with my working day, thankfully at home, so I do not have to make a treacherous journey by car.

Inspired by the view outside my window today, and my Creative Writing homework, to describe a winter view without using the verb “to be”.