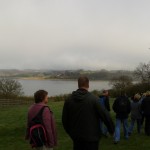 After a fantastic Spring day on Saturday with temperatures rising to a record 22deg in March, we awoke to a cold misty morning, with frost warnings in the car, early on Sunday morning.  The clocks went forward an hour overnight, so it was a very early start for us and quite a long drive to the start of the walk, which meant that we were up at the crack of dawn. Forewarned that the temperature would be even higher that day, we had dressed accordingly in tops more fitting for the end of April or early May, but fortunately had the presence of mind to take coats with us as it was very chilly to start with, but we wished we had brought our hats and gloves as well. However, after setting off at 10.30 (9.30 in old time) we soon warmed up, and about an hour or so into our walk most of us were shedding our coats, as expected.

It was a very pleasant walk around the peninsular with stunning views across Rutland Water, and the promise of bluebells about to burst into flower in the woods we passed. The drought in the Midlands was even manifesting itself at Rutland Water, where water levels were visibly lower than usual. The leader set up quite a pace, so there was not much time to stop and take photos for fear of being left behind, although we had a couple of refreshment breaks on the way round, as usual. After a fairly level walk around the peninsular there was final short steepish climb back into Hambleton along the road. The 13th century Church of St Andrew in the village has an unusually squat spire which we found to be a feature of other churches in the area, when we took a trip to Lyddington on the way back home.

We did not stay to lunch at the Finch’s Arms as it is an upmarket pub with an upmarket menu. Sunday lunch was a 3-course set menu costing £20, which they couldn’t advise us about until noon, so several walkers, including our car load, decided to find a cheaper pub elsewhere. We found a perfectly adequate roast dinner for a tenner, sitting outside in the sunshine at the Wheatsheaf in Edith Weston a few miles miles round the south side of Rutland Water. 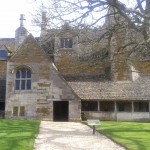 After a relaxing couple of hours lunching and chatting, we made our way to Lyddington to see the Bede House, which was unfortunately closed on Sundays. So we took a few photos of the outside and found our way to the old fish ponds at the west side of the village, that were mentioned on the board outside the Bede House. I met an elderly lady walking her dog, who told me all about the stream that used to feed these fish ponds centuries ago. It had been diverted many years ago by a local landowner to feed his own ponds in his garden apparently, and because he was an influential person, the local council did nothing about it. An enlightening 20 minutes or so later I managed to escape, and rejoined my friends sitting on the bench on the village green! 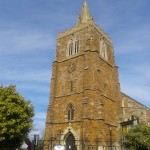 We retraced our tracks to the Bede House and on into the Church of St Andrew next door, which also had an equally squat spire as it’s namesake in Hambleton. We spoke to the church warden who told us that the beautiful etched glass above the entrance doorway into the church depicted the view of Lyddington from the A605. Unfortunately, my photo does not do this etching justice, with the light from the window behind, as the church is obscured by the reflective light.

Altogether it was a very pleasant day out. Who would have expected to be able to eat a roast dinner outside in March in England, and have it stay hot? 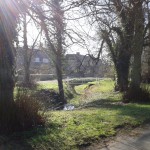 Having planned two long walks over the weekend, I was determined to carry on while the Spring “heatwave” lasted, so had contacted the Rambling Group to see what walks were on their programme this season, only to be told they were holding a walk from Barnwell on the Monday after our regular walk. Rosemary and Joy were game to do it, so we joined the group at the start of their walk from the Montagu Arms. 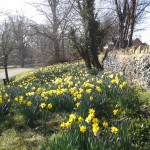 What a pretty village Barnwell is. There are two rows of attractive houses of differing ages on opposite sides of a pretty tree-flanked stream. A lovely old bridge crosses the stream, there are several footbridges and also a ford across at one point. This walking group, will stop for photo breaks, unlike most rambling groups, and we all had a group photo near a large bank of daffodils in front of the graveyard outside All Saints Chancel, which we then walked through and on into open countryside. 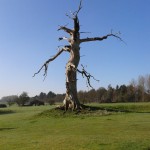 We were greeted by the sight of a long-dead Ent-like large old tree beyond the graveyard at All Saints Chancel. I imagine this dead tree has probably been left there to enhance the view, or for the benefit of photographers. I wish I had the chance to take a photo of the tree with the chancel in the background, but by this time the walking group of 22 were stepping out purposefully across the grassland to the old station and across the wooded old railway line where there were masses clusters of white violets. I don’t know what happened to my 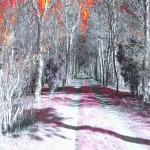 camera settings at that point, because the old Victorian building at the old level crossing and the woodland alongside the old railway line have come out very ghostly looking. Is this area haunted?

The following walk was slightly uphill part of of the way, and across some very large alternately ploughed and planted fields. The view across these fields was almost prairee like, until we reached the summit where we were treated to magnificent views of the surrounding countryside. This would not be a walk for a hot summer day, because there is absolutely no shade. In damp conditions, the ploughed fields would make very heavy walking if the soil was wet, but it was a perfect walk for a bright Spring day such as this. 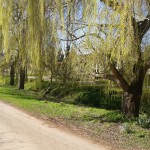 Our return into Barnwell presented us with lovely views of the village. The willow trees alongside the stream were just bursting into lime green leaflets and looked spectacular in the bright sunshine.

I would have liked to have spent longer wandering around the village, but my companions were tired after two long walks two days running, so we got back into the car and drove to see the ruins of Barnwell Castle, disappointingly in the grounds of Barnwell Manor, owned by the Duke of Gloucester (although he no longer lives there), and with no access for the general public. 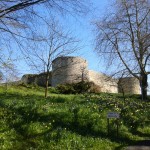 I managed to take a couple of photos from just inside the driveway before the security van drove down! Amazingly, you can see on the satellite image on Google maps that there is a tennis court within the walls of the castle.

It had been a very pleasant way to spend a Monday morning in our March “heatwave”. We had actually done the walk in reverse from the walk described in our “Pub Walks in Northamptonshire” book. It would be interesting to do it the correct way round next time.