Earls Barton to Hardwater Mill and back

A teashop walk with the Ramblers 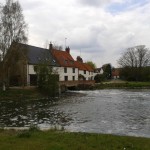 After having sat in the sun at home all morning working on my computer, I was looking forward to my four mile afternoon walk from Earls Barton to Hardwater Mill and back. I have driven past this attractive old mill many times, and never had time to stop and take photos. Today would be my chance.

As I parked up, I wished I had remembered to bring my brolly, the sky was looking very dark by now, and the inevitable April showers were forecast. Still, I can’t manage both a brolly and my walking pole anyway, so I resigned myself to the prospect of getting very wet. The other intrepid walkers had the proper wet weather gear, but as I am usually a fair weather walker, all I had was my lightweight dog walking jacket, which has been washed so many times it is no longer waterproof. We assembled undercover outside the Jeyes Museum, but by the time we set off on our walk, luckily the shower had finished. 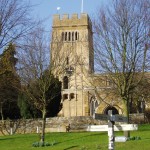 My friends were leading the walk, which meant that one of them had to be the back-marker, so I stayed at the back with her and another friend. The other two set off out of the town (or should it be village?) At this point, it doesn’t look like a village to me – too sprawling, too modern. We headed along the road towards Gt Doddington until we reached the end of the houses and took a right, along a bridleway, I think it was called. Not one of the usual lumpy, muddy bridleways that rick your ankles on a good day, and that you get bogged down in on a bad one. This was a more civilised track and the puddles were easily negotiable. We reached a rickety bridge over the river and weir, where I managed to take one photograph before the group set off again. All of us managed to cross without mishap, and we were in open grassland. Nice clean walking, even after all the soakings there had been in the past few days. 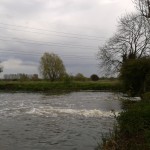 We are so lucky in East Northamptonshire to have all this water – even during a hose-pipe ban. The river Nene meanders along its valley, and there are huge lakes alongside it left behind after quarryings. They don’t seem to lose their water during a drought – maybe the water from them should be piped to fill the rapidly emptying reservoirs! Our walk along the Nene way took us alongside the river, with a lake on the other side where we spotted a little egret, amongst the other usual water birds. Why hadn’t I brought my binoculars? Hundreds of lambs with their mums were bleating at us as we passed, but the leaders had set such a pace I didn’t get time to take any good photos, just a few quick snaps before running on to catch up. Well, not exactly running! 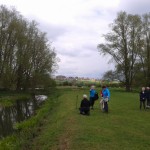 A quick stop for refreshment, and on we carried on towards the redbrick mill at Hardwater crossing – not so attractive as I remembered it from that direction. I thought it was white. However, as we got closer, I could see it was painted white at the front only. As we negotiated the two narrow road bridges at Hardwater crossing, we were struck by the volume of traffic on what we all thought was normally a quiet, backwater road, leading nowhere but Grendon or Wollaston. Several coaches passed us, heading in the direction of Wollaston. Someone said they would be coaches collecting the children from the popular Wollaston School. 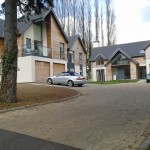 Now for the gradual climb back up the hill from the river up to Doddington Road, which thankfully we did through a field with a hedge between us and the road, which was very busy. I have been down that road which also leads to Summer Leys nature reserve many times, and not noticed the very modern chalet style houses at the junction. Do I drive with my eyes shut?

At the junction I tried to photograph the tulips on the verge at the other side of the road, but the leaders were striding out again and I had no time to get close enough. We finished the walk along Doddington Road, which thankfully had a pathway on one side of it, and back into Earls Barton for coffee at the tiny coffee house near the corner of Station Road. We just about managed to squeeze into the back room. 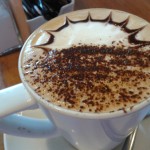 Sixteen of us had done the walk, but I think a couple didn’t stay for coffee or tea and cake, probably just as well, because we couldn’t have fitted any more in.

Amazingly we had completed the walk without a drop of rain after the initial shower we had before we set off. However, by the time I got home, down it came again! April,with its accompanying water shortage, was acting true to form! Who needs a hosepipe anyway?