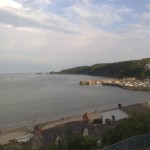 A one legged seagull, appropriately called Heather used to greet us every morning when we went to breakfast on the sun-soaked balcony overlooking the bay at Saundersfoot. We weren’t really supposed to feed her, according to the rules of the large self-catering house we had rented for the week, but at least one member of our party used to take pity on her. In the evening she was joined by a friendly blackbird who used to serenade us while we supped our evening cocktails on the same sun-soaked balcony. We were so lucky with the weather. Every day it tipped it down, but always at a time before, or after, it mattered. 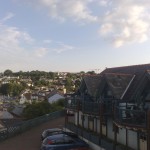 Saundersfoot out of season is another of my favourite types of holiday resorts. Large enough to have everything you need nearby, including a regular bus, and small enough not to be too commercialised. Tenby is not far away, you can walk it, if necessary, or as some of us did, go by bus. However, don’t expect to be able to use English bus passes.

Unfortunately, this holiday turned out to be disastrous for some of our group. There were fourteen of us on this holiday, not all staying at Admiral’s House, I might add. Eleven of us in the house was plenty! It is difficult getting plans for the day sorted when there are so many, but we managed most days to do something that most of us wanted to do. One male member of our party, who had distanced himself from us most of the time, said he wasn’t happy that we walked so slowly, so he went home halfway through the week. We think he’d really fallen out with his ex-partner who was also on the holiday. And then there were thirteen. Two members of our party went home early because one of them was ill, so then there were eleven. Another went home early because he had arranged to spend the last day somewhere else, so then there were ten. Then one spent the day in bed because she was ill. We began to wonder who would be next! 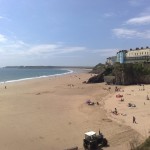 After arriving on Friday, and exploring Saundersfoot, our first whole day was spent in Tenby, which coincided with the Wales Marathon so the town was absolutely packed, and runners kept passing us heading for the finish line all through our visit. Eventually we went down on to the beach and walked some distance to the other end of the town. On our return into town, runners were still coming in to the finish line, but some of us luckily managed to find a vacant table for lunch in the garden of a high street pub, which served a good range of fish dishes, and decided we would all return for an evening meal another day. We had already booked our evening meal at the Royal Oak Inn, our local pub in Saundersfoot, that night, where we had a lovely meal. 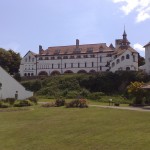 The next day, Sunday, we took a boat trip to Caldey Island, where we explored the Abbey grounds and St David’s Church, walked to the chocolate factory where some of us sampled the delights, and on to the cliff tops in the south of the island. It was blowing a gale out there, and we quickly returned to the shelter of the Abbey gardens and the tea house for a light lunch, before returning to Tenby for our fish supper at the Hope and Anchor. 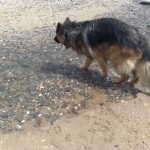 On Monday some of us decided we would go for a walk from Saundersfoot to Wiseman’s Bridge, the next village along the coast. We had a quick drink and a bag of crisps and then strolled along the beach, watching the fun that ‘our’ dog was having digging holes and splashing around in the water. Take away fish and chips was on the agenda for that evening which we had sitting on the benches at the harbour, watching the boats and the world go by. Then back to our temporary home in Admiral’s House for the rest of the evening. 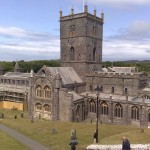 Tuesday all who were left were driving to St David’s, the other side of Pembrokeshire. However, one in our party had gone home already and another two stayed at Admirals House because one of them was ill. We had arranged to meet at the visitor centre, where we had a cup of coffee, waiting for one car load of our party to turn up. With no sign of them, we made our way down to the Cathedral where we found them, eventually. After a look around the Cathedral we went on for a drink at one of the locals. Some of the party then wanted to go shopping in Haverfordwest – not my cup of tea, so I returned to Saundersfoot, with the intention of going for a walk along the beach. However, I found my friends packing up to go home, as one of them was so ill. Supper for ten that night was homemade shepherd’s pie at Admirals House. We were all a bit deflated now some of our party had returned home. 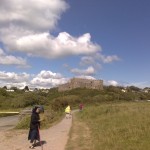 On our last full day on Wednesday, the remaining nine of us drove to Upton Castle Gardens, some beautiful gardens, near Pembroke Docks. After a lovely peaceful morning exploring the gardens and chapel there, we drove on to Manorbier Castle. A couple went to look at the castle, the remainder of us spent an hour or so on the beach.

And so back to Saudersfoot for our ‘last supper’ at The Captain’s Table in Saundersfoot, surprisingly better than we though the food would be. Our holiday would soon be over, because we had only been able to book six days, from Friday until Thursday, and we had to leave early for the long journey home the next day. I needed to get back to the kennels in time to pick up my dogs before they closed. 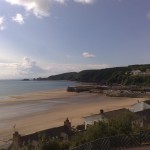 This would have been a good holiday, had it not been tainted by the problems we had with some of our party being ill and returning home early. It had saddened us all. The house was fantastic, and I would return there any time, or even to the smaller cottages next door. The outlook over Saundersfoot, and the bay, was spectacular.