Loping in Lowick and Drayton House

A ramble with a Rambling Group from Lowick, followed by an NGS visit to Drayton House open gardens, was on the agenda for today – were we going to get a soaking or not? One forecast I saw said not, another said we would. Maybe I should sue the BBC internet forecasters!

We arrived early for the walk in Lowick, and sat waiting for the others to turn up. At 10am there was just our carload of four and another car load of two, still waiting. At 10.15am, we decided that the organisers had decided to cancel because of the drizzle, or maybe even because they thought the fields we would be crossing were too muddy. We hadn’t rung them to check if the walk was still on, knowing that we intended to go to Drayton House gardens after the walk or if the walk was cancelled. With no sign of anyone else turning up, all six of us drove the mile or so to the gardens instead.

Brolly up and braced for the driving rain, we paid our fiver for the viewing of the gardens, wondering if it was really going to pay off, opening the gardens, for the first time in 85 years apparently, on a day like today. There were only about eight cars in the car park when we arrived. Well the day was young yet, and the weather might improve later. 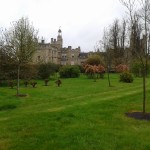 The brolly was a bad idea, it afforded little protection, and kept turning inside out in the wind anyway, but I’d taken it, and I was jolly well going to keep using it! The others’ woolly hats just got progressively wetter as they weren’t wearing hoods either. I tried every angle I could taking photos, in the hope that some would be bright enough, but they all came out dull.

Outside the greenhouses we met the friendly ‘head’ gardener, who gave us some interesting snippets of information on what it is like managing the gardens of such a large property, and also some useful advice on how to look after certain plants. He only had one very part time assistant, so all credit to his efforts. Inside the greenhouses was a welcome break from the cold and damp conditions outside. He told us that all the plants in the greenhouses were for decorating the house later in the year.

After an hour and a half, we left the grounds, noticing that there were even fewer cars in the car park by that time. It didn’t look like it was going to be a lucrative day for the NGS. What a shame. But we felt privileged to have been able to see the gardens, albeit in the rain. Now all we need to do is get a big enough group together to visit inside the house itself, and spend a little more time loping around Lowick. The magnificent St Peter’s Church is well worth a visit too. 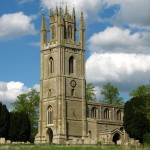