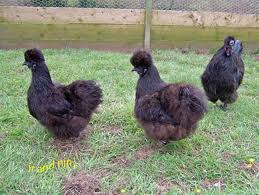 Once upon a time we were given three black silkie bantam hen chicks, by my husband’s gothic daughter, for his birthday because he wanted to have really fresh eggs for his breakfast. We called them Claudia, Clara and Chloe Cluck. They soon became part of the family. My husband insulated our shed with polystyrene tiles, covered with a second layer of wall boarding, which he thought would keep them nice and cosy at night, and also deaden any sound they might make.

Soon our chicks grew bigger and started a routine of patrolling the garden, stopping every now and again to turn over a stone and snaffle the woodlice or other insects that might be lurking underneath. They had a rare old time every day until just before dusk,  when we found them queuing at the door of the shed, waiting to be let in to roost for the night.

A few weeks later, I happened to notice that one of the chicks, Claudia, was standing proud on a rock, with her head held high, making strange noises.

“I think Claudia is trying to crow” I said.

It was not long before we both realised that Claudia was not a hen, as she had been sold to my step-daughter, but was actually a cock! Okay – no problem! We called him Claude after that!

Claude took command of his sisters Clara and Chloe, and used to lead them around the garden, practicing his very best crow, until one day we found Clara reluctant to leave her warm, comfy straw bale in the shed. We hustled her out, only to find she had been sitting on a brood of eggs – eight in all. Not knowing what you are supposed to do with broody hens, we decided to leave them to their own devices, assuming that instinct would prevail. Inevitably, one day when we let them out of the shed, we were ecstatic to find that a chick had hatched out. By the end of the week we had eight – Clara had done a good job.

Seven of these chicks were jet black, like their parents, but one surprisingly had the markings similar to a tabby cat! A throw back from the past, no doubt, as next door’s cat was a Siamese, and couldn’t therefore be blamed!

As soon as the chicks were able, Claude used to proudly parade around the garden with his two hens in tow, followed by seven little black chicks, and last – the little tabby chick which we nicknamed “Oddie Chick”. This daily parade around the garden was to continue for weeks during the summer, until one day there were only seven chicks waiting outside the shed door to go home to roost with their parents and Auntie Chloe. Where was little Oddie Chick?

We searched around the garden, and sadly found little Oddie had drowned in our pond.  😥

I was devastated. I had become very fond of him. Chickens have got very individual characters when you get to know them, and Oddie was special to me, particularly because he was very different from the others. That night I composed a little epitaph to him (with apologies to Elton John):-

Goodbye Oddie Chick, though we never knew you for very long.
You may have been strange, and different from the rest
but you were one of our family, you were special to us –
you were loved a lot – we thought you were the best.

The summer continued, and the chicks got bigger, until again I spotted one of them standing on a rock and trying to crow! Yes, another cockerel in the making! A few weeks later, we realised that there were three of them, and they had started to bicker with each other. The young cockerels would have to go, or we would have blood on our hands. We were lucky enough to have a bird sanctuary near us, who agreed to adopt our three young males. We were then left with six hens and Claude.

One by one, I found our hens drowned in our pond. Eventually, when there was only one hen left I actually caught him at it. He had been showing the hens where to get the nice juicy pond weed, then took advantage of the situation and had his evil way with them, ultimately pushing them into the pond in his excitement!

In spite of his misdemeanours, Claude was quite a character. After he had so lovingly despatched all his females into the next world, he lived alone with us, at the bottom of one of our aviaries. or in the bird shed inside. The routine of letting him out in the morning for his daily stroll around the garden continued, and he would be waiting at the aviary door to be let back in at night when we returned from work. When we were at home during the day, he would sit at the patio doors, looking longingly in. We would give him the odd raisin or currant, which was quite comical, as chickens have poor eyesight apparently. He would appear mesmerised by the treat in our hand and almost fall over sideways in his attempt to retrieve it! I became very fond of him, as one does, and one day my husband came home to find me asleep on the sofa, cuddling Claude, who was fast asleep too!

I can’t remember how many years we had Claude after that, but I can remember that we actually took him on holiday with us one year, in his own little carry crate, to Folly Farm (a waterfowl centre near Bourton-on-the Water in the Cotswolds), where the site owner very kindly provided him with a chicken run of his very own. That put him in his place! He wasn’t used to containment, having had the freedom to roam around a whole garden. The resident cockerels roaming around the site used to take the mickey out of him, I think, from the noises they all made! Anyway, at least he had fowl company again for a change!

The last time I saw Claude was when we went on holiday and left some of my pets with my daughter to look after. There not being an insulated shed to lock Claude into at night, he did his usual morning performance unrestricted! My daughter’s neighbours were not happy! After complaints, she asked the local park warden, who had aviaries in the grounds, if he would take in the reprobate for the duration of our holiday, which he gladly did. My daughter and grandchildren used to go and visit him, and he appeared very happy in his surroundings, so on our return we made the decision to leave him there where he was happy, with the consent of the park warden.

Claude was to meet his comeuppance though!

In the Easter floods of 1998, sadly the birds on the ground in the aviaries all drowned.  😥

But Claude will always occupy a warm space in my heart.