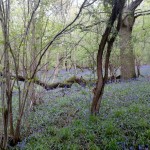 Today a bluebell walk from the Bell at Odell was on the agenda for our Strollers Group. Amazingly 21 of us turned up, in spite of the recent bad weather. We weren’t sure whether the walk would be too muddy, after the continuous rain we have been having for weeks. Jenny and Chris had reconnoitred the walk earlier in the week, and got bogged down in the mud, but a few of us had done a different part of the walk a few weeks before, and found that it wasn’t particularly heavy going, not like tramping across ploughed fields, or along ridged bridleways, anyway! We decided to go ahead and risk the walk through the woods, rather than just walk around the lake in the country park. Thank goodness we did – the bluebells were in full bloom. 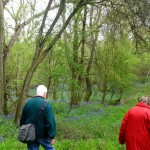 We had a lovely walk. From the village we took the wide grassy pathway leading directly to the woods. As we reached the woods, we turned right and went around the perimeter. The bluebells were amazing, they seemed to go on forever. There was quite a bit of wild garlic in flower too, and I managed to capture on camera a flowering horse chestnut. We reached the edge of the woods and turned back in on the pathway towards the centre again, but here the volume of bluebells seemed to diminish a bit. But by this time we had all had our bluebell fix for the year, I think! 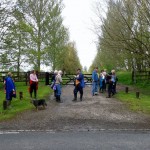 Yes, the pathway was muddy in places, but mostly you could avoid the worst bits. We covered the biggest segment of the woods, and after assembling in the middle of the woods where five different pathways converge,  we decided  it would be prudent to cut the walk short and take the shortest route back, because a couple of the group were struggling after the steady climb from the village to the woods. Following the pathway back to Odell, eventually we retraced our steps through the clean long grass on the wide ‘civilised’ pathway leading back to the village. This made more sense than having to climb a high stile and walk the perimeter of a couple of fields.

We were lucky with the weather. We had had masses of rain chucked down at us overnight, with evidence along the country roads between Podington and Harrold, where there was standing water all over the road. But two forecasts on the BBC and the Met Office websites said it would be rain at 7am, but sunny intervals at 10am and 1pm, then showers later. This time at least, they were accurate forecasts. 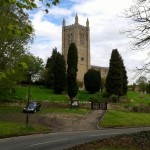 Whilst waiting for the others to catch up, I took a couple of photos of what was described as Odell Castle (not much remaining now) and Odell Church, before we went back downhill to the Bell, where we had an adequate plateful of food described as smaller portions for £4.95. It was decided that we would return to do the longer walk sometime during the height of the summer, as it would mostly be nice and cool in the woods.