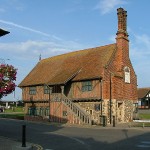 No, we didn’t walk all the way to Snape Maltings from Aldeburgh. The coach dropped us off in the south car park at Aldeburgh and we then did a circular walk of about four miles which brought us out on the north side between Thorpeness and the actual centre of Aldeburgh. Some of us walked across the high banked shingle beach, because at this point in time we had not even seen the sea! Walking on shingle was heavy going, but we captured some photos of the shells statue on the beach, and of some pretty wild flowers which were growing in profusion on the shingle. In the distance along the coast we could see Thorpeness with its famous House in the Clouds, which is just about visible in one of my photos. We then made our way back to the top path where walking was easier, as we approached the town.

We had well earned our fish and chip lunch, but there were long queues at both fish and chip shops. Eventually our turn came and we gladly took our hot packets to sit on the sea wall, watching the world go by. It is surprisingly quiet in Aldeburgh, considering the number of people around. No swearing or loud people around. We ate our fish and chips in peace as even the gulls seemed well behaved there! There was a predominance of terns, and only a few gulls. Well that is until one of our party decided to throw her chips to some nearby terns. We heard the only seagull in the area call his mates, then all hell broke loose and gulls came from far and wide. One aggressive gull had a youngster by his wing and wouldn’t let go. So much for the peace and quiet we had been enjoying! A nearby person told us off for throwing the chips and said there was a £1000 fine for feeding the seagulls. Wrong! There were signs we found later to say there was a £2500 fine for that offence! Was I guilty by association? My friend was mortified!

Although I couldn’t quite get the gist of the local architecture which seemed to be very varied, there were some interesting buildings, which would be good to explore when we have more time, but we had to be back at the coach fairly early, due to the planned stop at Snape Maltings, a huge shopping complex in pretty surroundings. 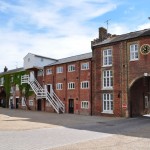 We were treated to guided tour by the artist’s son of some lovely old paintings of local area scenes in a small gallery, then went for a welcome cup of tea and a sit down, leaving the shopaholics to do their thing.

We had been very lucky with the weather. It was a fantastic day, just right for walking, and our fears of getting soaked were totally unfounded. The rain started again, just as I was driving home from where our coach dropped us.