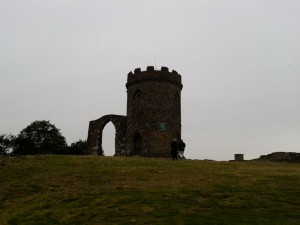 I was out for a walk trying to get some air
before going to see if I could get my hair
cut by the hairdresser who lived in Coalville.
She was a friend, and she would do it for good will.

I had caught an earlier bus, just for a lark
so I could to take a wander around Bradgate Park.
The bus driver stopped a while in Newtown Linford,
and I quickly hopped off while others climbed aboard.

In Bradgate Park it is a little bit hilly,
but on a good day, when it’s not at all chilly,
you can get to the top of Old John hill quite quick,
unless, like me, you’ve forgotten your walking stick!

I could see the folly at the top of the hill;
I’d been out a while but I’d some time left still,
so with my best foot forward I climbed to the top,
although, I admit it, I had to take a stop.

Being out of puff, I paused to admire the view.
I could see for miles: fields, woods and some chimneys too.
There was not a sound, except the wind in my ear.
I could understand why they built their folly here.

I was lost in thought, travelling through history,
wondering how many wanderers sat like me,
gazing across the scenery of this county,
at what nature had provided with her bounty.

Had lovers come to this place for a secret tryst?
Had outlaws come across it when lost in the mist?
Did bandits come here to stash their ill-gotten gains?
Had kings riding horses sheltered from heavy rains?

I wondered what secrets this grand folly could tell.
Had anyone died here, or been murdered as well?
I wondered was it haunted with spirits at night –
this friendly folly, our landmark in broad daylight?

In my musings I hadn’t seen the sky get dark;
a huge cloud of gloom had descended on the park.
A flash of lightning woke me sharply from my dream,
and a loud clap of thunder almost made me scream.

Suddenly came the rain in vertical stair-rods
and I was miles away from home, up with the gods!
I’d not got my raincoat, nor even my brolly.
I was alone up here in front of this folly.

I tried the door handle, hoping it would open.
It was cold, wet and slippery at first, but then
it started to turn and, much to my great surprise,
the door swung open, I could not believe my eyes.

I was out of the rain and safe in this shelter,
but it was so dark that I began to swelter.
The door closed behind me; I was shut in the dark,
and with claustrophobia, that isn’t a lark!

Turning the handle, I heard a sound like a bullet.
I tried the door again, but just couldn’t pull it;
it felt like it was stiff and not going to budge,
and as I tugged again I felt a gentle nudge.

My hair stood on end, I was transfixed there with fright,
I wondered what was there, moving without a light.
Was it the ghost of some medieval retainer
or of a Cavalier killed by a campaigner?

Was it one of Robin Hood’s merry but dead men?
Was it Lady Jane, who had come back here again?
Or Old John himself, resurrected from the fire?
My hands were clammy and I started to perspire.

With one last massive wrench, I hauled the door ajar,
but it stuck yet again, not opened very far,
yet luckily wide enough to let in some light,
so I could get to see the cause of my great fright.

Standing close beside me was a short silent shape,
not tall enough to be Dracula in his cape,
nor Dick Turpin with his horse Black Bess could be there,
nor anyone returning from Widecome fair.

This silent short dark ghostly shape was much too small,
before it nudged me, I’d not spotted it at all.
Could it be a hobbit or even a goblin
who had wandered in here because he was hobblin’?

The shape made a familiar sound I could hear.
I tugged the door wider to see what caused my fear.
When I tell you what it was you’ll laugh ’til you weep.
My short dark ghostly shape, was just a lone black sheep!

Written after a weird dream I had last night about Bradgate Park and Old John, but adapted for our creative writing homework which was a Fiction Square using the words I chose from it of:- Bus Driver, Hairdresser, Phobia, Rain, Thunder, Park and Walking Stick