Eight of us , a combination of Exnus and Harmony groups, met outside the Town Hall in  Towcester on a bright, but cold December day for a guided tour given by Don, who is an active member of Towcester History Society.You will find all the details on their website, and far more history on there than I can recount here.

Don started by telling us a quick potted history of Towcester, which apparently dates back to a long time before the Romans. The Roman name for Towcester was Lactodorum. But according to Wikipedia, Towcester comes from the Old English Tófe-ceaster. Tófe refers to the River Tove;Bosworth and Toller compare it to the “Scandinavian proper names” Tófi and Tófa. The Old English ceaster comes from the Latin castra (“camp”) and was “often applied to places in Britain which had been originally Roman encampments.” Thus, Towcester means “Camp on the (river) Tove” and Towcester lays claim to being the oldest town in Northamptonshire and possibly, because of the antiquity of recent Iron Age finds in the town, to be one of the oldest continuously inhabited settlements in the country. There is evidence that it was settled by humans since the Mesolithic era (middle stone age). There is also evidence of Iron Age burials in the area.

Of course, Don told us all that, but as I didn’t have a notepad with me, and as my memory is not as good as it used to be, I had to consult the oracle – good old Wikipedia! 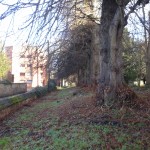 We started our tour at the Chantry opposite the town hall, where Don told us all about Archdeacon William Sponne, who set up the Chantry and a school, and is now buried in the church, which we visited next. There was a service in progress, so we decided to return to see inside the church on our return at the end of the walk. Don then showed us the site of the original main road throught Towcester, which instead of following the A% as it now does, was at right angles to it, passing by the church where we were standing.

From Chantry Lane we then went down Moat Lane to the Castle Mound, and climbed the pathway ascending to the top, where there are explanatory plaques all the way to the top describing the history of the town. A good view of the surrounding meadowlands and historic buildings is afforded from the top of the mound, and Don explained that there were development plans for the nearby area, including the old unsightly mill buildings. 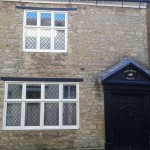 Back down from the top of the Castle Mound, we made our way to the Saracens Head, passing by the old MU Oddfellows’  Hall and into Park Street where the old Mint House is situated, a much bigger building than its frontage suggests, when viewed from down a nearby alley. Continuing on into the main road of Watling Street, Don showed us the medieval buildings that were still standing, although much changed.

We completed our tour by visiting St Lawrence Church again, now that the service was over, which afforded several interesting photos, including those of the two tier tomb of Archdeacon William Sponne.

By this time we were ready for a warm up and some lunch, so as previously arranged, we got into our cars and made our way to the Bell Plantation Garden Centre Restaurant. Following a browse around the centre, where there was also a mini craft fair, we went back to Don’s for a welcome warm up in front of his log fire, and a photo show. All in all, it was a very pleasant day for all of us.