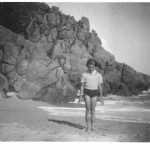 I went to Porthcurno Beach as a child
and I have never forgotten its charm.
The day was windy and the sea was wild,
although as I paddled it felt quite warm.

Years later I went back with my daughter
but had no time to go onto the beach,
seeing the Minack we were too late for
but took some photos of all we could reach.

I went back again with some friends of mine
and photo’d the Minack Theatre views.
I hope to see a production next time,
if I find it advertised in the news..

In twenty twelve they performed “Titanic”
exactly a hundred years to the day,
after she left to cross the Atlantic,
the great ship passed westward bound on her way.

One of the many things I’d like to do
quite soon, is to watch a play by Shakespeare,
set on a stage with the sea as the view.
I can’t think of a better place than here.

Almost as far west in England as you can go
lies the beautiful unspoiled beach of Porthcurno.
On the way to our well known landmark of Land’s End,
it is well worth the time and money you would spend
to stop at the Minack Theatre just close by
and admire the vista from the stage in the sky.

Porthcurno is derived from Porth Kernow (Port of Cornwall)