Jan 7th 2013 — Not really a New Year resolution, more that I took advantage of an opportunity to have a garden tidy up, before the weather returned to norm. It is quite mild, so I got dressed before going down to sort out the dogs, instead of keeping on my jim jams and dressing gown until I had eaten my breakfast. Consequently,  I went out to sweep up the leaves and debris in the dog run before breakfast, and came back in at lunchtime having filled a garden wheelie bin with garden trimmings and weeds. Is this a record early start on the gardening front for me? Or is it just that the weather was so bad at the end of last year that I never got the final garden sort done?

I noticed that the daffodils are poking their heads up, and grape hyacinths are spreading wildly all over the gravel, so I still have more to do — maybe tomorrow? However, I did manage to plant the cyclamen corms, late narcissus bulbs and iris bulbs I bought cheap on November 17th and never got around to planting. They were starting to sprout in their packets, so I hope they will grow. If not, c’est la vie!

Under my New Year regime of chucking out everything that is past its sell-by date, I reluctantly said goodbye to my old faithfull lavendar bush — an offspring from the original bush I brought with me as a cutting from my old house. However, there is a tiny self-seeded bush in a pot nearby, so hopefully the family line can continue.

I would imagine my garden will be predominantly pink this year as the Valerian have spread like mad, and produced some very sturdy plants. I dug up some that were in unwanted places, but at least I can be guaranteed some colour, if I don’t get around to planting any annuals!

Well, there’s been absolutely no incentive to go out and do any more gardening so far this year, until today. After the snows of the last couple of weeks, and the bitter cold, it’s been all I can do to walk the dogs (or the one dog for the past three weeks since I lost my Jezzie) , as quickly as possible and get back indoors.

However, today I went out the front to clear up all the dead Alder catkins that have covered my driveway and half the street, and didn’t come back indoors until three hours later when my back would stand no more, and the garden wheelie bin was full. It wasn’t particularly cold working, but I was well wrapped up anyway.

My daffodils at the front, always the first in the street to appear. came into bloom finally just before March 8th, the day I lost my Jezzie. Since then they have been battered by snow and ice. Some are out in the pots in the back garden, but the others are still in bud, showing no sign of wanting to open.

The snowdrops gallantly survived all the snow over the past few months, having opened up just before it snowed, and are still blooming well. Crocuses are up, but need some sunshine to open. No sign of any irises yet, apart from one in a pot under the porch. The muscari are poised and ready to bloom, if we get any sun. I found some pulmonaria in flower, struggling to be seen under the rosemary bush and in the gravel at the back.

That is the sum total of the colour in my garden at the moment. But………

Forsythia is in bud and raring to go, as is ribes, ceanothus and skimmia. Clematis is sprouting well , so is the magnolia. Dicentra is about four inches out of the ground, peony about two. No sign of much life from anything else yet, just loads of leaves. The ash trees do not show any sign of leaves about to burst, but the silver birch has some small leaves sprouting at the top. The Weigela has looked better, although there is still some colour on it.

Unbelievably, the frogs have managed to have their annual beach party in the sunshine sometime, and the pond is full of frogs spawn.

Just give us a few days of warmer weather, and everything will probably start coming at once!

Gardening gloves didn’t seem to stop my hands getting raw, as it is hard picking out the little weeds from the patio cracks with them on. Never mind, my manicure didn’t last the week anyway! 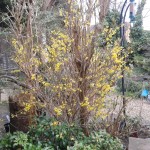 Well, we got the warmer weather, and out has come my Forsythia and Ribes, as expected. My early daffs are now dead, but the rest are still nodding well. Muscari is absolutely everywhere, so I will be ruthless with them, when they have finished flowering. 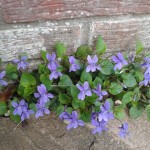 I spent a good three hours today tidying up the dog run, and the patio area. I don’t know where the time goes, but it is a labour of love digging every unwanted plant out of the cracks in my patio. Most people use weed killer, but mot I. I am selective about what is allowed to grow in the cracks, and the violets are allowed to stay. They are looking super. Perhaps I won’t pull them up when they’ve finished flowering. Perhaps I will leave them to form bigger clumps. One patch I left last year looks beautiful. 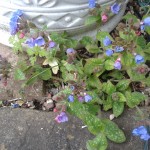 My Valerian has spread itself everywhere. I pulled it out from where I didn’t want it, like in the gravel or in my patio cracks, but I think my garden will be looking very pink later this year! At the moment it is predominently blue Muscari, purple violets and Pulmonaria, with a dash of yellow Forsythia and pink Ribes.Oh, and I forgot to mention the orange Berberis in the wilderness down the end. I will get around to sorting that bit sometime soon, maybe! In the meantime, the local wildlife are happy down there. 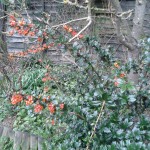 My Dicentra is a foot high, but no sign of flowers as yet. Skimmia is about to burst out into flower, as is my pale pink Magnolia. My Peony is well up, and I actually trimmed the Hydrangea heads off the plant in the back garden. I hope we won’t be getting a frost again this year. I left the one in the pot at the front though, just in case.

There is some blue showing on the Ceanothus, and the Aubretia is out at the front, as is the purple everlasting wallflower. The Viburnum is looking much better, with new pink flowers. I didn’t have time to do anything in the front garden, although I would have liked to have trimmed the Yew a bit. It’s starting to dominate the area. 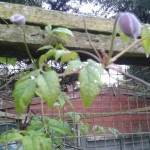 The little delicate Clematis is budding up, so that won’t be long. It will be interesting to see what is out by my birthday in two weeks, as everything is late so far. Maybe it will catch up if we have another couple of warm weeks.