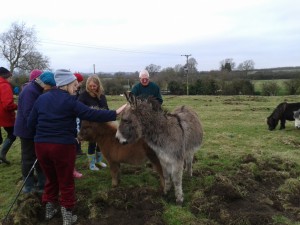 Today it was the monthly Strollers’ walk, and with great trepidation I drove to the venue in Bozeat. I was not looking forward to a tramp across soggy waterlogged fields after my last walk with the Shamblers, when I fell over in the mud, after having tramped through miles of very unpleasant mud around the perimeter of Kinewell Lake. However, I need not have worried because, although understandably slightly muddy, the grassy pasture fields were fine.

The first field we entered was full of animals:- llamas, pot bellied pigs, sheep, goats, donkeys, Shetland ponies — you name it, they seemed to be there. Perhaps it was an animal shelter or something. One llama displayed a certain amount of curiosity, but would not come close to us, whereas the donkeys and Shetland ponies came over to see if we were carrying any goodies.

There seemed to be quite a few stiles on this walk, one of which was very rickety, but our huge post-Xmas crowd of walkers all made it over them okay, and eventually, after negotiating crossing the A509, we came out by the church in Easton Maudit where Derek Nimmo is buried. We stopped at the church for our usual refreshment break, had a look at Derek Nimmo’s grave and the ancient hollow oak tree. Then the rest of the party returned via the road to Bozeat and the Red Lion, while the three of us decided to have a look down the lane at Derek Nimmo’s house, before we followed them.

It was only supposed to be a mile from Easton Maudit to Bozeat along the road, but it seemed a lot further, but it must be because walking along a roadway seems further, because Google maps has only calculated it at 1.2m. However, we caught up the tail end of the remainder of the Strollers, in time for a very average cheap lunch.