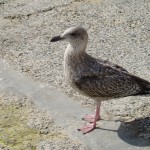 Maggie sat on a bench on a cobbled street in St Ives with her pasty, watching three seagulls arguing about some chips that a child had thrown to one of them. Next thing she knew, seemingly from out of nowhere, another seagull swooped down, grabbed at her hot pasty and flew off with the top half of it, landing a few feet away from her with the huge morsel of pastry.

“Charming! Hope you burn your beak!” She spoke out loud, not realising that there was a man just about to sit on the bench beside her.

“They are a real pest,” he said. “It doesn’t help that the kids keep giving them chips. No matter how many notices they put up asking people not to feed the seagulls, people still do. Did he get much of your pasty?”

“No, just the pastry end of it, I think. It looks like they have got it down to a fine art!” Maggie replied as she spotted another seagull sweep down and grab a large piece of battered cod from another lady sitting on a nearby bench.

“Are you down here on holiday?” asked the man.

“No, I’ve just moved down here,” replied Maggie and explained that after her husband died three years ago she had eventually done what they had always planned to do in their retirement.

Maggie had sold their family home and retired to a lovely little cottage in their favourite place. Her children had moved away to foreign lands, and now she was no longer working, she had nothing to keep her in the Midlands. She had moved into the cottage only that morning and was spending her first day unpacking, so had not yet got around to shopping. She had just popped out for a pasty at tea time. 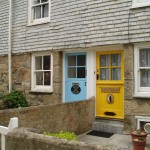 “Well, I expect we’ll be seeing a fair bit of each other then. I live in that cottage just over there with the red door. I guess we are neighbours. My name is Jim.”

“Pleased to meet you, Jim. My name is Maggie, and yes, we are neighbours. My cottage is the one two doors away. The one with the blue door.”

“Well, is there anything I can do to help you move in? Do you need anything fixing? I’m a dab hand with an electric drill and screwdriver.”

“That’s very kind of you to offer,” replied Maggie. “But I think everything is already sorted for me. The house had been completely renovated before I bought it. All I have to do is unpack boxes, and go shopping.”

“Oh well, you know where I am if you need a hand,” said Jim. “I’ll be off now. See you around sometime. Maybe at the local one evening? They are a friendly bunch there. We can’t do it in season of course, it’s jam packed, but now it is out of season, we locals usually gather there most evenings.”

“Okay then, Jim. I may pop down there one evening later this week, when I have settled in.”

All Maggie’s worries about finding new friends seemed to disappear. If everyone was as friendly as Jim, there should be no problems joining the community. Maggie was looking forward to meeting the locals. She polished off her pasty and went back to her cottage to continue unpacking.

That night, Maggie went to bed early, and settled down to read a chapter or two of her book before turning out her reading lamp. She snuggled down under the duvet, feeling quite content and at peace with the world.

“You’d love it here, Charlie,” she said aloud. “I wish you were here with me.” Maggie was twisting her wedding ring, as she spoke. She still missed Charlie, but was coming to terms with her life alone. In the Midlands she had joined several local U3A groups and was starting to enjoy her social life again. She hoped there would be similar groups she could join in Cornwall.

Maggie had fallen asleep, but was jolted out of her deep sleep by a loud shuffling noise, which seemed to come from the attic. Maggie sat up in bed and switched on the lamp. She had not been up in the loft, deciding that there would be no need to go up there, as she there was no loft ladder, and she wasn’t fit enough to try climbing step ladders. She listened for a while but could hear nothing more. Maybe she had imagined it. She got up and went downstairs to get a glass of water, looking into each of the tiny rooms as she passed, just to be on the safe side. She wasn’t usually easily spooked, so she decided this was a strange house, and she needed to get used to the noises it made, and went back to bed. She lay awake for what seemed like hours, listening to the sounds of the house: a creak here, a clonk there….and then again the shuffling noise from above. Maybe she would ask Jim if he would look up there tomorrow.

The next day, Maggie went shopping first, then did some baking. After lunch she went round to Jim’s cottage and as he answered the door, she apologised for bothering him, but told him about the shuffling noise she had heard from the loft. Jim’s face paled. “What’s the matter, Jim? Why do you look so shocked? Is the house haunted or something?”

“But what?” Maggie asked.

“Well, the last tenant of the house complained that she heard shuffling noises up there, but the owner dismissed it and said she was just being silly. That tenant was a bit stuck up and never mixed with the locals. She moved out soon after that, and the owner decided to sell up and move back up North. I’ll come round with a ladder and take a look up there, shall I?”

“Oh, thank you Jim. That would put my mind at rest,” replied Maggie, trying to hide her relief.

Jim followed Maggie back to her house with his tool kit and a step ladder, which he climbed up into the loft of Maggie’s house. A few minutes later, there was a sound of hammering from up in the loft. Jim came down again, laughing.

“You’ll never guess what was causing the shuffling noise up there,” he said to Maggie.

“Well a seagull had got into the roof via a small hole in the eaves and built a nest. There were all sorts of things in the nest, including chip bags which I suppose it had stolen from bins and brought to its home here. Looks like seagulls have taken a particular shine to you since you have been here. No wonder it is called Seagull Cottage.”

Maggie laughed. “I thought that was because you could see a lot of seagulls from here. No-one told me why it was called that when I bought it, and I never thought to ask.”

“Well, the poor seagull will not be able to get back into its nest any more. I’ve blocked up the hole well and truly, and had a good look around to see if there is anywhere else that it can get in. I think you’ll be free of them in future.”

“Thank you so much, Jim. I’ll sleep easy tonight now. I’ve just made some scones ready for a nice cream tea. Would you like to join me?”

“I sure would,” replied Jim. “I love a woman who can cook. I think you and I are going to get along great. In return, I’d like to take you out to dinner tonight. What do you think?”

“I think that would be lovely.” Maggie smiled to herself. She was quite taken with Jim, and he seemed to like her too. At last her life was starting to look promising again, and all thanks to seagulls.