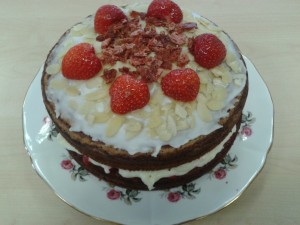 Now for my competition entry.  The surprise is that I actually have made this cake at all, with my oven cooking at an unreliable temperature, and with me not being a domestic goddess at all.

As I made the cake on Wimbledon Finals Day, I knew I wanted to make my cake Wimbledon themed. I originally wanted to ice it in purple and green, and ice some tennis racquets and tennis balls on it. I abandoned that idea after icing a plate with writing icing, and realising that I was useless at drawing, especially with icing! I hoped I would be able to colour one cake layer purple and the other green, but I discovered to my cost that a purple and green cake was not going to work well, and the amount of food colouring with e-numbers in that I had to use made me cringe. However, although I kept the original idea of having a two-tone and two-flavoured cake, I had a quick rethink and baked a marbled cake, which seemed to have actually worked on my previous cake, but this time I chose to use a strawberry and cream colour scheme. I duly made my cake batter mix and flavoured half of it with mashed strawberries, using cochineal to add depth of colour. (Cochineal apparently comes from an insect. I’m glad I have used all natural products in my cake – there are two many e-numbers in other food dyes.) The other half of the mix I flavoured with french almond extract and left it to bake its natural colour. For this reason I dropped using the brown sugar and increased the white caster sugar. The marbling worked well again, hopefully there will be a strawberry and cream marble effect on the finished article.

Next I made the ratafia biscuits. I mixed the ingredients which were supposed to make 24. Hopefully some of them would work out okay. Note to self:- next time, ignore the instruction not to whip the egg white into peaks, and go for the peaks. My biscuits turned out too flat. I also added almond extract, which possibly made the mixture softer. No matter, I had a different idea by the time I had baked two tray loads of white ratafias, and again I added cochineal to the mixture for the final two tray loads. This made them even flatter! So it will be crushed pink ratafia biscuit crumbs to decorate the top of the cake at the last minute, I think.

After a hot morning with the oven running for about two hours on the hottest day of the year so far, I wrapped up my two cake halves in foil, and put my ratafias into a tin while I watched Murray versus Jokovic final.

Tasting my two previous experimental cakes had made me decide that I needed more strawberry slices in the filling, with a thin layer of strawberry jam glaze spread on them before adding the fondant cream filling. The glace icing top I believe made the cake less sickly than having the fondant cream as a topping as well. Flaked almonds sprinkled on top seemed to suit both previous types of cakes I had made, as did the strawberry halves, but whole ratafia biscuits were a bit much. Hence why I decided to sprinkle crushed pink ratafia crumbs over the cake at the last minute. Although they would go soggy, the whole ratafias would make an interesting aspect to the cake if included in the sandwich filling. I’m out for brownie points for originality!

I drove to work with the cake and proudly showed it to my workmates, who seemed to like the look of it. But what about taste and texture? We were being marked on appearance, taste, texture and degree of difficulty. It looked okay, and I was hoping to score well on the degree of difficulty. But would it taste good to them? And was the texture going to left me down? I waited for their gasps of surprise when they saw the two tone interior of the cake as I cut a slice out, and winked at my boss, who had given me the idea. He was mortified he hadn’t tried it himself when it was his turn to bake a cake the week before, and vowed to do another.

Well, I got a good score. In fact three people gave me 10/10 on each element, which I think was a bit generous really, but I was very grateful to get, because it put me in the lead. Now I wait with trepidation for the next two cakes to be produced. The last one is being baked by someone who does designer cakes and has a website full of them, so I stand no chance! But at least I have proved to myself that I can bake a passable cake.