It’s been a while since I wrote to you, but I still miss you every day. I hope you are happy where you are, and feeling better. I remember how much you were suffering the last time I saw you.

It’s very quiet here without you, but I have to admit that I like the fact that I now have Mum’s undivided attention, and the extra walks she gives me. I seem to be getting stronger from all the extra walking, and I hardly limp at all, although I know that is because Mum gives me medicine every morning. 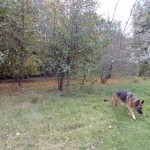 You would have loved the walk we did this morning. Mum got up very early, even though it was Sunday, and we went out in the bright sunshine of the fresh early morning. It had been raining overnight, and everything was fresh and green. There weren’t that many doggy smells for me to sniff at, as they had mostly all been washed away, but when we got to the park, I saw the dalmation and black labrador that we sometimes used to see when we were on our walk. I called to them, but I was on a lead and their owners wouldn’t let them run over to see me.

We sauntered to the other side of the park where they had been, but they had gone out of sight by that time because Mum and I walk a bit slower nowadays. We even got overtaken by a man who was out walking on his own. He chatted to Mum as he passed, saying what a lovely morning it was. 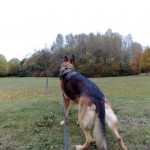 When we got to the road between the two parks, I wanted to go to the left and back to where the rabbits usually hang out, but Mum insisted we went on and through the second park. I decided we were probably going to do the same walk that we did yesterday morning, which is a lovely walk, I must admit, but very tiring for me. I wasn’t wrong. 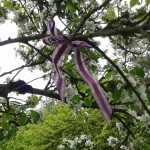 We stopped by your apple tree, as we always do on that walk. Mum gives the tree a hug and looks up at your ribbon she hung on a branch there back in the Spring when it was full of blossom. It’s full of apples now, but they aren’t very big yet. Mum always looks a bit sad when she is there and sometimes she cries, but stopping there for a tree hug gives me a bit of a chance for a breather.

I like it there, because Mum usually lets me off the lead then. Remember when she used to spend ages over there throwing balls for us, between the woods and the big building we pass on the way home? Remember the time when she threw one of those balls with a rope on it and it got stuck up in a tree? Mum spent ages trying to get the ball back with a stick, but never managed to, and we had to give up the game and go home. Remember that? Mum went back the next day with her walking stick, in the hope that she would be able to reach it, but it had gone by then. 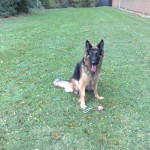 Mum doesn’t throw balls for me now because she knows I collapse when I run fast, although she still has a ball game with me at home where I don’t have to run much. I really miss having you around then, it’s not so much fun now I know that I’ll always get to the ball because you are not there to try to snatch it first. You always tried to get it first, but I was always quicker at it than you, te-he!

I was hoping Mum would take us through the woods on our way back home, like she did yesterday, but she said it would be too muddy after the rain last night, and she took me back along the road bit to the park where the rabbits hang out. We were just about to cross over the road and go into that park when we could hear a lot of shouting over the other side, so Mum wouldn’t go over there. We could see the dalmation and the black labrador with their owners over there and they were shouting at another man who’s horrid little brown dog was running riot off the lead and bothering the dalmation. I think it may have been that pit-bull cross staffie that used to attack us sometimes. I’m glad to say though that when we got back to the park the other side of the brook, we could see that the dalmation was back safely with his owner and on his way home.

Guess what? We saw a sparrowhawk yesterday in that park. He was just sitting on the ground but flew off into one of the apple trees over there, where the green woodpecker usually flies off to. Mum walked over to the tree and we could see him clearly sitting on a branch. Mum was just getting ready to take a photo of him when he spied a wood pigeon and went flying off after it.

After walking back through the park, when I got to the underpass I was very tired and dragging my feet a bit, so much so that I could hardly bark a greeting to a couple of dogs that were coming towards the fork in the lane, and we made it back to the lane behind our house without any other incident, except that a couple of resident dogs must have heard me going past, and they started barking a greeting, but I was too tired to reply by then, so they just barked at each other.

I had really enjoyed the walk, but I was glad to be home and looking forward to my breakfast. Then, joy of joys, Mum got out her frying pan and a load of food from the fridge. Awww! The divine smell of sausages and bacon cooking! I knew I was in for a treat. Yes! She put out a special plate for my sausage and some fried bread. Yum yum!

Mum’s not done much since then, except work on her laptop, and I’m very content just to lie on my cushion at the patio doors watching the birds come and go. Well it’s really your cushion Mum bought you when your legs were getting too stiff to jump up onto the chair very easily, but I use it now. Very comfortable it is too! The sun has gone in now, but there are loads of butterflies fluttering around the buddleas to watch.

I’m getting really sleepy now, but I just wanted to tell you that I still miss you, and I’m sure Mum does too.

Lots of wuffs and stuff

from your loving sister 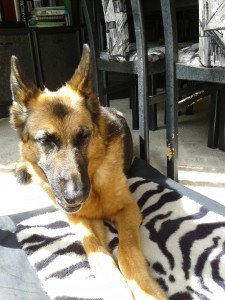