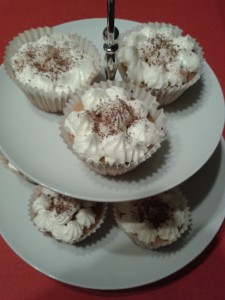 Making cupcakes should be easy.

Heat oven to 180deg (or 170 deg in the case of my useless oven). Take 110g salt free butter, 110g castor sugar, 2 medium eggs and 110g self-raising flour with 1 tsp baking powder. Do what you are supposed to do with a Kenwood Chef or other food mixer then add a tsp of favourite flavouring (in my case Taste the Difference French Almond Essence). Spoon enough mixture into each cupcake case in a twelve hole muffin tin. Bung in oven for 15 to 20 mins, test they are ready, remove from oven and cool. Okay, did all that. Made twelve.

Answer the Skype call from daughter in Canada. Sneak a cake to taste while talking to daughter. Decide to use another recipe next time. Sneak another cake because lunch was just a cup-a-soup, and it’s nearly tea time.

Three hours later, walk dog before it gets dark and then go back to cakes and quickly pipe decorative blobs of the butter icing mix on top of eight cupcakes. Decide to decorate the other two with mini marshmallows, the way that was originally planned, to look like sheep or white poodles, following instructions found on internet.

Look in baking materials drawer for the coloured writing icing bought to perhaps decorate the cake made for the previous office cake baking competition. Give up on that idea when finding most of the writing icing tubes missing with the empty boxes remaining, except for the one with green, yellow and black icing in them. Wonder why there was only half the tube which had contained the yellow icing in the box, yet the black and green remained intact. Notice mice droppings. Chuck the remaining tubes of icing in the bin, and the empty boxes into the recycling bag. Check all cupboards and drawers for food items and sigh with relief to know that there are no more edible items in any of the cupboards or drawers that can be reached by mice because there are no backs to the naff cupboards fitted when the house was built.

Note to self:- check the kitchen cabinets in the showroom to make sure that all the drawers will have no mouse access before ordering new kitchen.

Decide not to give up the day job.

Take all cakes into work for cupcake judging competition next day, just for a laugh, because it is now too late to make more.  😳

Actually, I didn’t do too badly after all. I was running a close second to the expert cupcake queen of our office until my boss took his turn, right at the end of the contest. He produced two awesome types of chocolate cupcakes, one lot filled with cream eggs and one lot filled with Ferrero Rocher chocolate. I chose one of the Ferrero Rocher ones, and it was absolutely d-e-l-i-c-i-o-u-s. Later on I had a cream egg one, which I did not actually like so much, but then again, I’m not that keen on cream eggs.