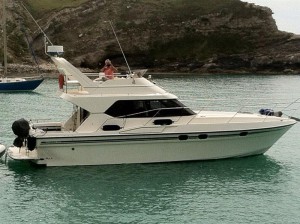 “Picture yourself in a boat on a river…”

The Beatles song was playing softly on the radio in the background. First of all I thought of tangerine clouds and marmalade skies, then I relaxed, closed my eyes and thought of myself on a boat, but it wasn’t on a river. Memories came flooding back.

It was my own stupid fault. I should have known better, but somehow I just couldn’t help myself. I let myself get chatted up by yet another charming man.

It was a hot day and I was sitting alone outside a pub in Padstow drinking half a pint of Stella. There were no seats available at other tables outside the pub and so when this gorgeous tanned hunk asked if he could share my table, of course I said “Yes”. What red blooded single woman wouldn’t?

We got chatting. First about the weather. That’s always a good opener in Britain, isn’t it? Then my companion introduced himself.

“My name’s Alan. You here on holiday?”

“Yes,” I replied. “My name’s Marie. I came down here a few days ago to visit the Eden Project and Heligan Gardens. I’m now exploring the old haunts I used to come to with my family years ago. You on holiday too?”

“Oooh! How lucky you are to live here! That would be a dream come true for me. I’ve always said I’d like to retire to Cornwall one day.” I was absolutely green with envy.

We carried on chatting and Alan told me he was a photographer. He actually came from Twickenham originally, but when his marriage broke up he came down to Cornwall and became a beach bum for a while, camping out and fruit picking to earn some cash until he found a proper job. He’d ended up with his own successful photography business.

“What a coincidence,” I said. “I come from Twickenham originally too.”

Having discovered we’d been to the same places at roughly the same time, Alan revealed his surname. I looked startled. Alan studied my face for a moment.

“Er… You weren’t Marie Wilson by any chance, were you?”

“Yes, before I was married I was. I’m surprised you remember me, Alan Hawkins. I well remember you though! You were a bit of a lad. You broke my heart.”

We’d known each other years ago as teenagers, when we went to the same youth club. In fact I’d gone out with him for months. He was a bit of a rogue in those days though and when I found out he was two timing me I’d ditched him.

“Gosh! And you’re a successful photographer now? I always thought you would end up being some sort of pompous solicitor or something. Remember when you coaxed me into your “studio” when I was sixteen so you could photograph me. I’ve still got those photos somewhere. And remember when you wrote me love letters every day when you went kayaking at Jaywick? Your next girlfriend, who you two timed me with, demanded I gave all those letters to her, Lord knows why.”

Well, how could I refuse?

We finished our drinks and Alan walked me round the harbour to where his boat was moored. He helped me aboard and showed me around. Sumptuous white leather seats in the spacious lounge, two cosy cabin bedrooms, a shower room, a fully equipped galley complete with dinette. Wow! This is the life! I thought.

Back on deck, a few minutes later we were cruising away from the harbour and out into the ocean.

“I should’ve stayed with you, if you can afford a boat like this,” I said.

Alan laughed. “I doubt you could have coped with being married to me any more than my wife could. Remember Pam? I ended up getting her pregnant. You had a lucky escape.”

“Pam! The girl you were two timing me with?”

“Yes. The very one. She was a bit easier than you. She succumbed to my devious methods of seduction.”

“Then you cheated on her as well, I suppose?”

“Several times. I was a bit of a bastard. Eventually she chucked me out.”

“Good for her. Poor Pam. I did warn her what you were like…”

“And now you are rich and famous, well infamous!”

“Yep. I just got lucky, I ‘spose… Champagne?…There’s a bottle in the fridge in the galley. Glasses in the locker above it. You’ll find them. I’ll leave you to pour us a couple of glasses while I take the boat further out to sea. Then we can sit and relax.”

And relax we did. Most of the afternoon. I could understand why I’d always fancied Alan as a teenager. He was still charming, and a couple of glasses of champagne later we were in bed together. Preserving my chastity at fifty, after a failed marriage, didn’t seem so important as it did when I was sixteen.

It wasn’t until afterwards that Alan told me more of his life story. He’d had an illustrious past it seemed and I started to get worried.

“I haven’t been exactly truthful with you,” he said mysteriously. “I’m not actually just going to St Ives today. I’m going to France.”

“What do you mean?” I asked nervously.

“I’m escaping. There are people after me. Bad people. I’ve got some photographic evidence that they are after. They’ve threatened to kill me so I need to leave the country pretty damned quick.”

“But you can’t take me with you,” I remonstrated.

“Oh yes I can,” Alan replied. “I need you as a scapegoat. They won’t be looking for two people. Besides, it’ll be fun making up for lost time.” He winked at me.

“Why don’t you just call the police?” I asked naively.

“It’s the police who are after me, or at least it’s a couple of bent coppers.”

“What on earth are you mixed up with?”

At that point there was the sound of a small explosion in the galley which Alan went to investigate, leaving me lying naked on the cabin bunk. Smoke started billowing in…

I opened my eyes. The dentist was looking at me oddly.

“Gosh, that was some dream you must have been in, but I’ve extracted your tooth now, and you didn’t feel a thing.”

I felt my cheek, and spluttered “Picture yourself in a boat on the ocean and it’s on fire. You’d think that it would be easy to extinguish a fire in a boat, wouldn’t you. All you need is a bucket and you can put out the fire yourself. But there is no bucket in the cabin you are in, only a couple of champagne glasses. There is fire between the cabin and the galley where the bucket and any other large receptacles are situated. In fact the fire had started in the galley….. what would you do?”

“I think I’d be glad to wake up and find my aching tooth had now gone,” the dentist said with a wry smile. “Have a rinse with salt water, but no hot drinks for a couple of hours. Take some Paracetamol every few hours if you are in pain.”